The truth always has a way of finding the light.

Playing Without Rules is Book 1 of 4 in the Men of Spring Baseball Series by Rachelle Ayala.

There are currently only 2 available in audio, but the rest are due soon!

Tor Thom and Charley Ongel narrate the series.
(They are an awesome duo!)

Being the first in the series, this could be read as a standalone. I personally would suggest starting with the novella.

This is a tale of second chances. If you are into those kinds of tales, then you are going to like this. As a mom, I can relate to wanting whats best for your child. I didn’t quite agree with some of Marcia’s actions, but could understand the logic behind her choices.

Marcia Powers told a lie four years ago over a miscommunication and has been running from it ever since, despite never leaving her small town. The holes she digs for herself just keep expanding, as all lies do. Bianca is the one that truly suffers in the wake of her mother’s delusions of grandeur.

Brock Carter did what the love of his life asked of him and left town to pursue his baseball career. He wanted to make himself worthy of her heart. Now he’s back, and determined to claim his dream, but Marcia doesn’t want him to have anything to do with her or her “little sister”. A child that just happens to be close in age to the time frame he left town, but that thought never occurs.

I had more feels for Brock and the other members of Marcia’s family than I did for her. She is a sloppy stack of pancakes on a good day, and she is a bit of a hypocrite. Luckily, the extra personalities balances everything out. There is a sneak peak at the end for Book 02, Playing Catch and it is quite amusing. I can’t wait!

Rachelle Ayala really brings the drama with this story! But don’t fret fans, there is hot steamy goodness too.

This whole series is voiced by one of the best duos out there! Tor Thom & Charley Ongel deliver again! Their performances make you love a character as much as you want to smack them for being an idiot. 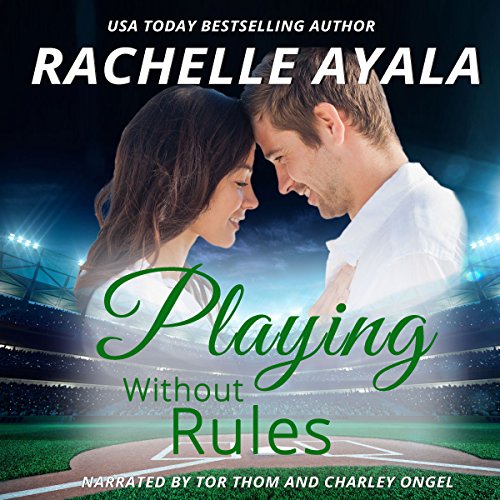 2 Replies to “Review: Playing Without Rules (Men of Spring Baseball #1) by Rachelle Ayala”