Had me at hot doctors, lost me in the middle, but then went out with a bang!

This story is about a pair of hot medical professionals who are over-worked and can’t get the alone time they so badly desire. Blake Colville is a doctor, no specialty specified, while his partner Aaron Miller is a hospital porter. (To be honest, I had never heard of that title so I had to look it up. It’s a job title only in the UK. It’s basically the errand runners for the nurses or physicians that essentially fills the gaps.) Even though the two live together, they are often on opposite schedules cutting into their quality time. Blake plans a hot weekend away for Aaron’s birthday so they can catch up on all they have been missing without interruption. That’s when things get really hot!

These boy are really into the kink. It starts off mild and moves into things I’ve never even heard of before. That’s where they lost me. It takes you out of the story if you have to stop to look up stuff. The stuff I had to look up was way past the common paddles and handcuffs. It was also past my level of interest. I know it’s about mutual pleasure and the act of submitting is part of that pleasure, but I would have had to use my safe word, sorry.

Thankfully that is not what it ended on. The story brought us on back to the love they share for each other and closed out with a romantic interlude to leave you all warm fuzzy! So despite the little part in the middle, it was overall a great story!

The narrator was Peter Revel-Walsh. His voice is pleasant and enjoyable to listen to and as for the story voice, and the non-main character voices, it was easy to distinguish the differences. As for the two main characters it gets a bit confusing. Blake is the dominant one so the more demanding words often come from him, but sometimes you just can’t tell who is talking. It’s not a huge deal because either way it’s still just the two of them and they are H-O-T-! 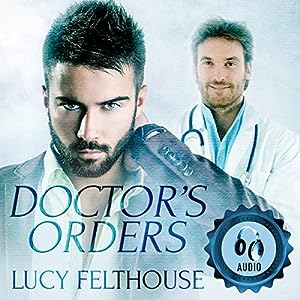