Love someone because of their differences not in spite of them!

I am an audiobook devourer, at minimum a book a day, seriously, I read A LOT, and mostly romances! I am also a writer, so am aware of the story from a technical point of view. That being said, I still love getting lost in the adventure of the story put before me and still get all the feels from the flutters to the knots and even the tears and the giggles. From the blurb of a book combined with the author’s style, if I have read other titles by them, I have a fairly good guess as to what is afoot in the story. It is not quite often that I say to myself, “I didn’t see that coming”. This story got me twice. Well….. Mostly once with the second time being a “you better be lying” moment!

There was a twist that was totally new and, yes, I didn’t see that coming! That was quickly followed by the second surprise that I didn’t see coming and was more of a “you better be lying” moment that had my heart in palpitations. Seriously, I had to take a break and breathe it out … and maybe do some creative cursing to the abandoned rant that had been building inside of me.

I loved it but would have to say to those of you that are like me and need that HEA, be patient. Keep that hope in your heart and it will all work out in the end.

Now to the book itself!

His Pretend Baby is a story about loving someone because of their differences not in spite of them.

The main character, Go, took me for a loop trying to figure out who was actually being addressed as there were too many names being thrown about. Let me simplify it for you. Rodrigo is his birth name, Go is his preferred nickname, Burger is the name his family calls him because he has Asperger. Total A-holes right?

So Nyla dated Marco, which is Go’s brother. It didn’t work out with him, but they have a drunken one-night-stand that results in a pregnancy. On the way to tell his current girlfriend what happened, Marco dies in a car accident. Sounds like a jerk move, but in the immortal words of Ross, “they were on a break!”

Go gets the confession out of Nyla before his family finds out and wants her to marry him and say the baby is his in an effort to keep the child with the family. He worries she will leave and the loss will drive his parent’s over the edge.

The two of them have chemistry but Nyla doesn’t like lying. Go manipulates the situation to his advantage and gets what he wants and a lot of what he doesn’t. Go’s perfectly executed life is supposed to go according to “the plan” of his own creation. Nyla is an expert at disruption and puts her skills to good use!

The narrator is Clementine Dove and she does well with multiple characters. Each person has their own voice and it is easy to get lost in the story.

This was my first time reading anything by this author and I definitely want to read more, but I will keep this experience in mind as I moved forward. 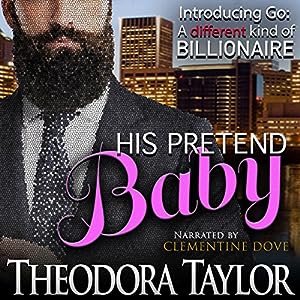