A lot of tidbit you won’t see on TV!

If you download the ebook, which is free for Kindle Unlimited members, it has a note that states that the book is constantly updated, so the audio and print may not match up.

The audio does not cover the last 13 episodes of the series which are being split into two seasons. The first half just concluded and the second half will play out next year.

The audio covers all that has happened so far in both the books and the television show. (see note above) The TV show is ahead time-line wise of the books, as Mr. Martin has deadline issues. There are still 2 more books due in the series.

This is a review of the various prophecies and dreams within the world of The Game Of Thrones as well as the books the show is based on. Many of these are not covered on the show as there is just not enough time to cover it all. The show-runners for GOT have expressed their desire to try and stay close to the over-all themes and stories from the books, so the unseen foreshadowing from the book should still hold true for the show as it does in the books.

There are some specific visions shown to Daney that I find most curious! Plus the most delectable one told to Cerci having to do with her being murdered by her younger brother! In her arrogance she has seemed to have forgotten that Jamie is actually her younger brother too! Even though I knew this already, I still like hearing about her demise because I really hate her.

Leanne Yau presents the information in a clear and precise manner. She is very easy to understand as well as being pleasant to listen to.

I give this a 5 for what it is, but also want to put a warning out there for those that are just starting the series either in print or TV, there will be spoilers. 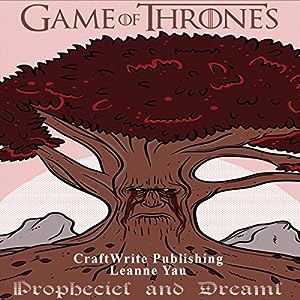 Game of Thrones: Prophecies and Dreams