The pain of loss affects us more than the joy of winning!

Apprentice is #02 of 05 in the Wanderers Series by Richard A Bamberg. There are currently 03 published with 02 being in audio. The author plans for 2 more bringing the total for the series to 05.

This is a continuing main character story-line so even though it is not quite a cliffhanger at the end, there is also no HEA either.

I would suggest reading these in order!

Warning: SEX!
As with the first one, Rafe manages to find his way into bed with multiple women, and now he has a female partner who is just as bad as he is, so yes, there is sex. You have been warned!

Trigger Warnings
Both of our wanders are veterans, and “chosen” from familiar battles. They have memories played out on the page with Rafe’s going back to Vietnam.

SPOILER WARNING
If you have not read/listened to book 01 in this series, some of this review might be spoilery for you.

Part 2 picks up not long after part 01. Rafe is getting an apprentice! Although he knows what it takes to join the Wanderer club, he still isn’t expecting the condition in which he finds his new trainee. The fact that his new apprentice is a woman is one for the record books. Allegedly, there has never been a female wanderer, but part of me feels like we will find out that is wrong.

“My name is Raphael Semmes, my friends call me Rafe. You and I are going to travel roads few people ever experience.”

The world building continues with more glimpses into other dimensions and the creatures they contain. Norn Fate Verðandi makes another appearance, for what I feel like is too little, too late. Seriously, that chick really sucks! We also get to meet another Godly being, to which I am not fully sure of his intentions. But given who it is, that is to be expected.

Loki grinned and for the first time I saw his legends appear in his features. “We wager loyalties, territory, and lives. For, in the long run, what else is there?”

Rowle is not seen in person this book, but that doesn’t mean his presence isn’t felt. He is busy spreading rumors and instigating havoc throughout the realms which puts a chink in Rafe’s training plans. On a positive, I don’t think Rowle knows about the new apprentice. Yet!

Through Tess we get to learn more about the life and times of what it is to be a Wanderer. We also get backstory clips from Rafe’s short time with his mentor Walt. It is sad and a bit alarming how much Rafe doesn’t really know.

Ragnarök would open the gates between Earth and the dimensions that held the old gods and all manner of mythological creatures.

There are twists and turns that take a toll. Hind sight is 20/20 and we do the best we can at the time, but it still cuts deep when you learn that you could of done it differently.

I can’t really comment more without spoiling something. And trust me, there are things I want to say about some of his regrets, but I will have to make this series a part of the Read Along With Me titles, so look for it over there hopefully soon.

This is my 02 read/listen by Richard A. Bamberg, and I want more! He is a mythology geek after my own heart! Sadly I will have to wait on part 03 from the Wanderers Series. 🙁
I am itching to get my hands on Monster Hunting 101!

This is my third listen by Johnny Mack, and I’m still not tired of his performances! His voice definitely works for the rough around the edges Rafe as well as the sassy Tess. He can also manage to set apart all the other voices to create separate characters that are each their own person. It’s easy to get lost in the wonderful world created by Richard when Mr. Mack is telling you the story! 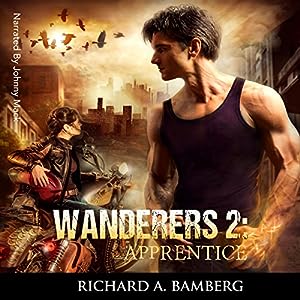 Written by Richard A. Bamberg