This story takes it time and allows for the couple to get comfortable as they get to know one another. That being said, this still takes place over only a week, but they aren’t just jumping into bed with each other immediately without so much as a hello!

Celine Patterson is camerawoman early in her career trying fill her resume. Jobs are not plentiful for a newbie so she takes a low paying, hardworking gig as the one person crew for Edward Robson. He is an older mid-list actor making a documentary on a smaller than asked for budget. Knowing how much of a raw deal Celine is getting, Edward tries to do what he can to make up for it. As the attraction grows between the two, they both worry over if it’s all in their head or is the other person feeling the same way.

Both characters come off as genuine people who put their own happiness over the opinions of others. And these two actually do something quite foreign in most stories and communicate! It’s amazing what complications can be avoided if you just have a conversation first!

I found this couple’s interactions quite endearing. I was rooting for them the whole way. Regardless of the age difference, they are still two adults who want to find love and companionship.

The Narrator of this audiobook is Xanthia Bloom. She does Celine and Edward justice. There is good distinction between the two and the story narration. That is most if not all of the parts of the story. 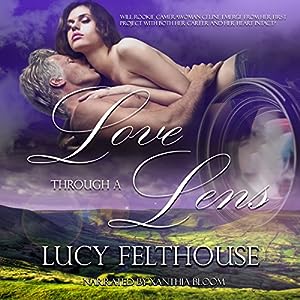 Love Through a Lens

Review: Love Through a Lens by Lucy Felthouse