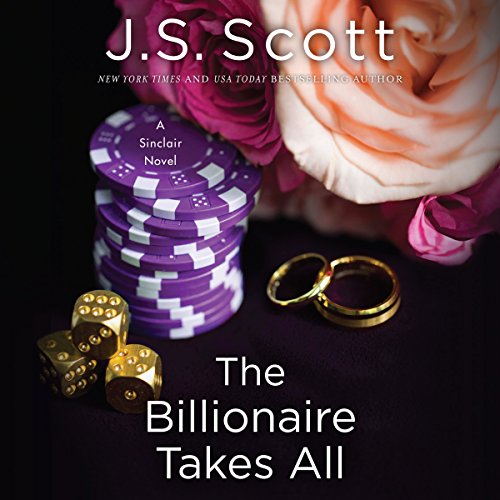 Those Sinclairs Can Be So Cleverly Opportunistic!

The Billionaire Takes All is #05 in the The Sinclair’s Series by J.S. Scott.

These are about the members of the Sinclair family. The characters are all involved in each others lives and stories so I would HIGHLY suggest you read them in order.

At the time of this posting, this title is currently available to Read and Listen for Free as part of the Kindle Unlimited Program.

The Sinclair cousin’s audiobooks are going in order from oldest to youngest, as the middle child is up next. Julian has been seeding his tale for a while now. Time-line wise, this starts during the Epilogue of the last book. Just know that even in real life, what happens in Vegas never stays in Vegas!

Julian Sinclair is the actor in the family. Despite having money and the ability to make connections that way, he refused to use any of it. He struggled and scrapped while hiding his identity so he could “make it” on his own merit. Why struggle when you don’t have to? It’s more about who you know than talent in Hollywood anyway. Don’t be obnoxious about it, but you shouldn’t hide it either. Julian has a lot of guilt over neglecting his family while he was hyper-focusing on his career. He would of been able to of seen his parents more than he did if he had used at least a little of his money to buy plane tickets occasionally. We all take it for granted that we have time for later, but you never really know. Today might be all you get!

Kristin Moore has been working at Shamrock’s Bar and Grill in some capacity almost all her life. Her mom was diagnosed with multiple sclerosis while she was in grade school and she has been picking up the slack ever since. This touches me quite deeply as I too have MS. Kristin is going in the opposite direction as Julian. She doesn’t want to miss any time with her family, but it is at the cost of her personal life. She is conflicted in her feelings for Julian. Its a bit love, hate smothered in insecurities.

Everything between these two, up till now, has been four-play! There are lots of twists and turns for this pair, but it’s so delicious to watch it play out! As with previous titles, there is lots of set-up going on for Xander’s story. There has been a mystery surrounding their parents death, and I’m very anxious about the details. It’s been held for his book, which is next. This Series is so addictive!

J.S. Scott keeps knocking it out of the park!

Elizabeth Powers has narrated all the titles in this series so far. At this point, she IS The Sinclairs!

Normal speed was fine, however I listened at 0.90x. It worked better for me.