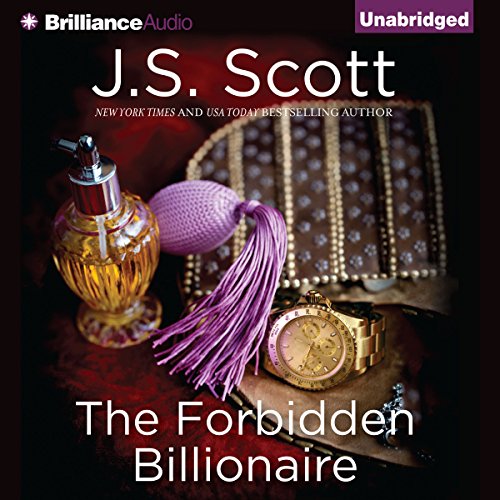 Broody Jared is SO Much More!

The Forbidden Billionaire is #02 in the The Sinclair’s Series by J.S. Scott.

These are about the members of the Sinclair family. The characters are all involved in each others lives and stories so I would HIGHLY suggest you read them in order.

At the time of this posting, this title is currently available to Read and Listen for Free as part of the Kindle Unlimited Program.

Up to this point Jared has been Moody and Broody! I had mixed feelings going into this story. On one hand he has been a d*ck and not yet redeemed himself for a HEA. On the other hand, I want to know what crawled up his bum and died because there has to be a story there. I was sure it was the after effects of his horrid father, but it turns out there is so much more!

Mara Ross is suffering from financial woes! Dolls are in her blood but not exactly profitable these days. The town doll shop has been in the family for generations as well as the apartment above it. Needed repairs have not been made in a long while and when she tries to get the landlord to finally fix it, she is informed that the plans are for destruction rather than updates. She doesn’t have any family left to turn to, so she ends up accepting help from an unlikely source.

Jared Sinclair is number four in the Sinclair line. This makes him the the youngest brother, but still older than Hope. His story starts off rather dark, as he apparently has some guilt issues that are being remedied with booze. Now five years later, he finds himself obsessed with the little shop girl in the run-down house. He can’t stand to see her hurt and offers to help with the situation. Of course he doesn’t mention that HE is the landlord that she is having issue with. He follows her to the farmers market and discovers her other more flavorable talents. He recognizes this to be her ticket out of financial woes and his ticket out of guilt.

There are things that Jared did that I had completely contributed to another sibling. Maybe I heard wrong in the past 3 stories, maybe I didn’t. All I know is that those things alone could redeem him, but it doesn’t stop there. Deep down he is a family man at heart who truly loves his siblings and would do anything for them. He brings that truth and loyalty to the table which makes him worthy of his HEA.

Lots of side character action to get excited about if you have been reading or listening in order. Dante and Sarah have their wedding which Mara gets to participate in. Future heros and heroines are introduce. Beatrice is up to her match-making ways for she is determined to have the whole Sinclair clan hitched by Christmas. This series just keeps getting better!

J.S. Scott has made a family to fall in love with. I look foward to listening to Evan’s story!

Elizabeth Powers narrates this story with great consitancy. She does well with all character types.

Normal speed was fine, however I listened at 0.90x. It worked better for me.