I want a manticore-possessed Harley!

This is the first book in the Wanderers Series. This is a continuing story line and characters, so even though it is not a cliffhanger at the end, there is also no HEA either.

♥ Story ♥
This story’s mythology is based around Norse traditions of the deities claiming fallen warriors as their champions. Most people are only familiar with the Valkyries, but just like the Greeks there were many deities to pray to that all came with their own entourages.

That’s where Rafe finds himself, as the minion of the Fate Verðandi. Who I have to say is pretty bad leading her Wanderers. Rafe has gone over 5 years without any contact or messages from her. As a Wanderer, he is to keep the status quo of good and evil by destroying demons that are causing havoc and disturbing this balance.

Rafe has been alone since his mentor was killed so is not in tune with the danger that is coming his way. Someone is trying to set in to motion the events that will lead to Ragnarök. For those that are not aware of what that is, it is the Norse equivalent of the end of days. It’s the final battle for the right to rule the world.

The mythology is solid, and there is a lot of action, but I feel like this title suffers from first-book-itus. Too much info dumped over too long of a time, pulled the story down with it. It’s still a good start to a series and I’m looking forward to the next one.

♥ Author ♥
This is my first read/listen by Richard A Bamberg and I think it’s a great start. Very creative world building. I’m very curious to see what book 2 brings.

♥ Narrator(s) ♥
Johnny Mack is great as always. I have listened to him in other books and he just has that perfect amount of gruff to his voice that can be both charming and sultry in the same book. 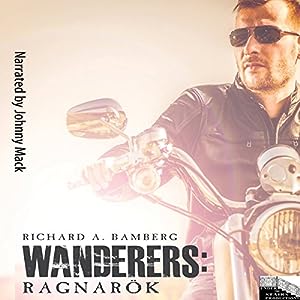 Written by Richard A Bamberg