A page turner, I can’t wait to listen to more!

Starblind is #01 of 04 in Starblind Series by D.T. Dyllin. All 4 are currently published with 2 of them being on Audible. #3 is in audio production now, with #4 to soon follow. The author has confirmed that #4 is the final book in the series.

Warning: SEX!
Yes, both in thoughts and actions, so if you do not like sex, then you should avoid.

Starblind takes place in the future many years after the original earth was destroyed. On New Earth, being “just human” is no longer good enough! Genetic DNA splicing is how babies are made in this new world. When children are old enough, they are tested, rated, and classified by ability.

Each book has a different couple as a main focus, but there is so much more to these tales! The characters at the center of the Starblind Series are rebels and dreamers, determined to buck the system of what is expected for what is adventurous.

Jane is a Hybrid Human and the owner and captain of The Pittsburgh. Her personality is snarky, rude, impulsive, and totally works for her chosen profession as a bounty hunter. The story starts with Jane in pursuit of one of those bounties, which goes wrong quickly.

Jane wants a fresh start and to be something more than what the tests say she can be. She tested out as a normal human, Species Class 1 out of 4. Most are expected to be Class 2 or 3, so this didn’t leave her many options, friends, or family on New Earth. That’s Harsh! So much for unconditional love in the future!

“I wasn’t a cat and I only had one life, so if curiosity killed me … I was screwed.”

Ash is Species Class 4, and you will have to listen for yourself to find out what makes him so special! He is the fly in Jane’s ointment when it comes to her bounties. His level of snark and mischief give Jane’s a run for their money! Ash knows there are secrets to be had when it comes to Jane, even if she doesn’t know them herself. The interactions between these 2 are hot and angsty.

Each of these females are also looking for a do-over and have sorted histories of their own. All of which I look forward to learning as the series continues.

“Well, I might as well tell everyone since I apparently can’t have any secrets around here.”

The Starblind series is a page turner and I can’t wait to listen to the next in the series, Parallax (Tamzea’s story). I can’t really comment more without spoiling something. And trust me, I have a bunch of comments to make, but you will have to go over to the Read Along With Me for it, to be posted soon.

“Once upon a time humans thought they were alone in the Universe.
….They were wrong.”

This is my 1st read/listen by D.T. Dyllin, and I can’t wait to read more! I love the world building and the characters.

This is my 1st listen by Ashley Holt and she did a good job with story. Her character separation could use some polish, but there are many more characters than your average title. 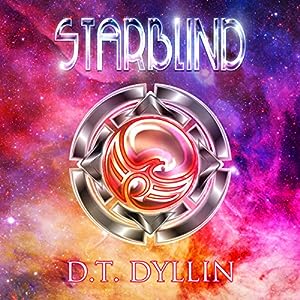