A good start to a promising series!

Asher Black is #01 of 05 in The Five Syndicates Series
(get it, 5) by Parker S. Huntington. The first 2 are published but only #1 is on Audible. The full series list can be found in the book itself or on the author’s page here.

This series is connected by characters, the school, and the mob, as far as I can tell. This is the first in the series and only one in audio. My philosophy is ALWAYS to read a series in order! :-).

Warning: SEX!
Yes, both in thoughts and actions, but very little. If you do not like sex, then you should avoid.

Asher Black is a mafia/new adult romance (my classification, not official). This is the first in The Five Syndicates Series series. 5 are planned.

It’s like a modern day Cinderella story, only I lost a burner phone not a glass slipper .

Lucy, almost everything about my name is fake, is a former foster kid that likes to run away from her problems. She is on scholarship at an Ivy league school where she instantly bonds with her roommate Aimee. Lucy is dragged to a hot club which sets into motion life altering events.

Lucy has a lot of baggage and can give you whiplash with her back and foth emotions. Her courage intrigues Asher, and thus goes our adventure.

Asher Black is the true hero in this story, in my opinion! He is known as a mafia fixer, but if you ask him about it, he would say otherwise. Asher is not a man to be crossed, but not everyone is smart enough to listen. He goes out of his way for Lucy and is fairly honest with her, despite her not doing the same. He needs a fake fiance to keep from being voted out of his company. Guess who that is?

There is not any info given for the other 4 books in this series except for #2 which has been published. Book #02, Niccolaio Andretti, features the mean girl schoolmate Minka and Niccolaio, who Asher called ‘One of His’. Book #03, Bastiano Romano, is about Asher’s ‘brother’, Bastian. Book #04, Marco Camerino, is possibly about Asher’s friend Mark, but not for sure. Book #05, Rafaello Rossi, is not a name I came across, even in part. I’m hoping for it to be the secret name of Xavier. :-).

This was a good start to a promising series. I look forward to listening to more in the future.

I owe a favor to a mobster .
How the Hell did that happen?

This is my 1st read/listen by Parker S. Huntington, and she has me hooked! The world setup is believable and there are definitely some characters I want more of.

Parker has 01 Audible Titles, this was her first!

Lacy Laurel gave yet another solid performance. The main characters were spot on!. The characters got a bit muddied when there were several in the same scene, but overall not too noticeable. 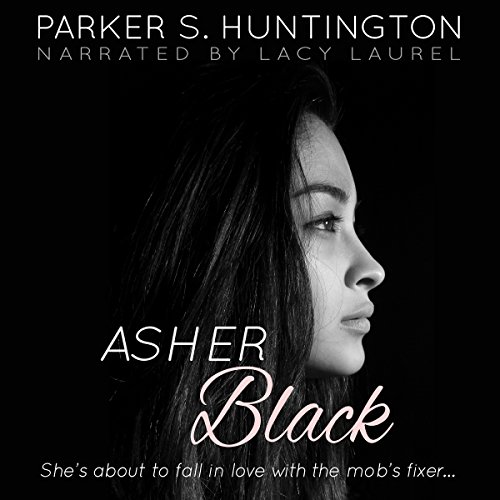